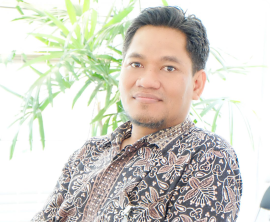 Dr. Eng. Mohammad Kholid Ridwan, S.T., M.Sc. was born in Bantul, Yogyakarta. He was spend my time in Bantul from Kindergarten until Junior High School, then He started to get to know the City of Yogyakarta after entering Senior High School in 1989. He was graduated from Electrical Engineering Undergraduate Program in 1997. After that, he joined Engineering Physics, Gadjah Mada University as a tutor. He had the opportunity to continue the master degree in Sustainable Energy Engineering at the Royal Institute of Technology, Stockholm, Sweden from 1999 to 2001. In 2004 until 2007, he continued his doctoral program at the Tokyo Institute of Technology, Tokyo, Japan. His dissertation talking about energy balance in urban areas. His current research deals with buildings and urban energy with sub-themes of building physics problems, energy-efficient home design and urban sites, as well as several themes about urban meteorology.